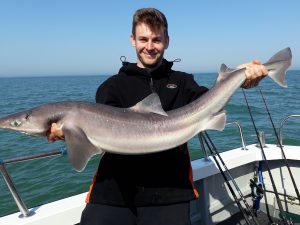 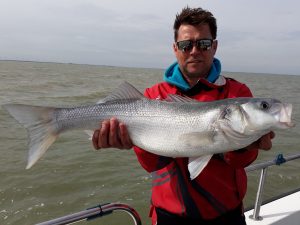 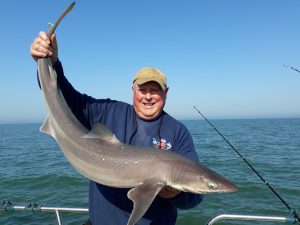 The fishing over the last fortnight has been improving all the time and with calm sunny weather we have got all our trips in.

The Thornbacks have pushed in to all areas inshore in good numbers, best we have seen so far are two fish at 16lb with a lot of the bigger females around 10-12lb, these females are spawning and should be returned alive. Best baits are herring, squid, bluey and pretty much anything fishy.
These fish will stay inshore until the end of May and early June.

There have been a few Codling still but most fish have now moved offshore following the Herring shoals but the fact that there were some in the Estuary bodes well for the Autumn when I think we will see some return inshore.

There have been some big Whiting around last week with Lee on the Sophie Lea reporting a big fish of 3lb 7oz, several others were reported at around the 2lb mark although there have not been so many this week.

The Smoothounds are starting to show with mainly small males at first with a few medium sized females starting to show, the smaller fish will take squid baits when skate fishing so when we move over to hermit crab we will see a lot more.

The first Bass are starting to show with a cracking fish of 8lb on my last trip on Monday, as we all now know the Bass have to be returned alive which is going to make it much harder to make a living for all skippers.

Offshore has been patchy but is starting to pick up with summer fish returning. We ventured further offshore this week and found some big Spurdogs, these cracking fish look like a hound at first but are darker and have two spikes at the base of the dorsal fins so beware when handling, they also have razor like teeth unlike the hounds which only have gums, they are  great sport.

Prospects are great, the cold spell we had did affect the fish but they seem to have bounced back well and are certainly not late this year which we have had in the past with really cold winters.

Expect to see more Bass and Hounds turning up and plenty more Thornbacks to fall back on, tight lines. 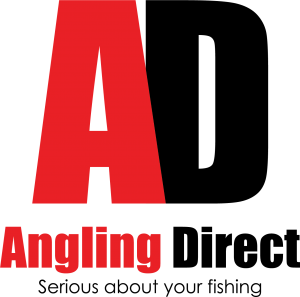